The Publishers Association (PA) has admitted a key figure it released on author pay was wrong; in fact authors received more money from publishers in 2016 than previously thought, with the figure first cited close to £190m out.

Writing in The Bookseller this week Stephen Lotinga, c.e.o. of the PA, said that a report released by the trade body in March, conducted by Frontier Economics, incorrectly calculated that the total payments consumer authors received in 2016 were £161m, based on advances, royalties, secondary licensing and rights.

However, Lotinga said the correct figure with the inclusion of advances stood at around £350m - a leap of £189m.

The report caused a furore when it was originally released earlier this year, with the Society of Authors (SoA) calculating that writers received around 3% of publishers' turnover in 2016 when taking into account the £161m figure, while publishers' profit margins were much higher.

Read Like a Writer is hosted by journalist Anna Fielding and each episode will feature authors recommending their favourite books, often around a theme such as childhood favourites or favourite classics, and talking about their own work. They will also discuss their favourite local independent bookshop and its importance in their lives.

How #ShareYourRejection Reminds Us That Failure is Normal

Big news. There’s no such thing as an overnight success. Any success we have is accompanied by years of work and often countless failures. As someone who has faced rejection more times than they could shake a stick at, finding the #ShareYourRejection hashtag on Twitter was a lightning bolt to the soul (in a good way). It all started when Saeed Jones, author and co-host of Buzzfeed’s popular AM2DM show, Tweeted about a recent rejection he recieved. 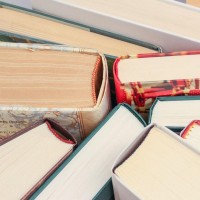 Why Authors Are Earning Less Even As Book Sales Rise

HarperCollins reported $490 million in sales for the last quarter on Thursday, up $83 million from the same quarter in 2017, partially due to rising digital audiobook and ebook sales. It's just the latest confirmation that traditional book publishers are doing well for themselves: The Publishers Association recently found the UK publishing industry's £5.7 billion in book sales income to be up 5% over the year prior.

That's in contrast to a June 2018 report out from the Authors’ Licensing and Collecting Society that holds author earnings have dipped by 42% over the last ten years, and that median annual income for professional authors is now below £10,500. How can author earnings slip so far even as book publishers' incomes continue to rise? There's no simple answer, but plenty of factors contribute to the seeming disparity.

Handles fiction for children, from chapter books for emerging readers up to young adult / crossover titles. No picture books. Send query by email with one-page synopsis and full ms. No postal submissions.

JK Rowling notoriously received numerous rejections before meeting her literary agent, and later, publisher. Having stacked up at least 60 rejections in my writing career, I know exactly how that feels.

And while being a novelist recently came out on top in a survey as one of the most desirable jobs to have, it is definitely not for the faint hearted.

I now have an agent and an award, but it wasn't always that way.

As a writer, the first step to securing a publishing deal is to acquire an agent, a middle-man, basically your number one fan who will shout about how good you are to publishers and hopefully persuade them to read your carefully-crafted novel.

They are the gatekeepers to the publishing industry.

Digital publishers, however, are changing the game because they talk directly to authors.

ICM upped Celestine Au and Madeline Feder to agents in the talent department, and Viviane Telio to agent in the motion picture literary department.

Au started at ICM in 2015, spending two years as a talent department assistant before being promoted to talent department coordinator last year. Au was recognized as one of Variety’s 10 Assistants to Watch in 2017 and is part of Time’s Up Next Gen. She was born in Hong Kong and raised in Shanghai before moving to the U.S. to attend UCLA, where she completed 12 internships and graduated with a degree in communication studies. She is fluent in Mandarin and has traveled to China with ICM agents, acting as an interpreter, and helping the team close deals and sign clients.

The one piece of advice every aspiring author needs to know

If you are one of the millions of people who aspire to be a published author, I have some writing advice for you: never listen to writing advice.

Not that it’s easy to avoid. If you go on Twitter and follow the hashtag #amwriting you’ll get more unsolicited advice than you know what to do with. Do this, do that, don’t on any account do the other. Everyone it seems, has some rules for you to follow.