Icon Books has been acquired by Amberley Publishing for an undisclosed sum.
Amberley said the acquisition would “provide a strong addition to Amberley’s existing non-fiction catalogue” and follows its acquisition of Quiller Publishing for £1.4m in June 2021.

Icon Books was bought by Jonathan Ball Publishers in April 2020 and Amberley said this acquisition follows detailed discussions on working closely together. 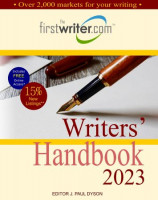 The 2023 edition of firstwriter.com’s bestselling directory for writers has just been released, and is now available to buy both as a paperbook and an ebook.

The directory is the perfect book for anyone searching for literary agents, book publishers, or magazines. It contains over 2,000 listings, including revised and updated listings from the 2022 edition, and over 350 brand new entries.

Thuan Dang has joined APA as an agent in the scripted literary department and Lucy Tashman has been promoted to Director of Content Development at the agency.

Dang represents writers and directors in feature films, TV, streaming and animation. He becomes the 15th new agent/exec APA has brought in during the past two months. Tashman began her career as an intern at APA and was promoted to agent in the scripted literary department in 2020.

A round-table with the exec at the Association of Authors’ Agents reveals a group champing at the bit to get back to Frankfurt—and to ensure there is space there for a broader spread of talent.

I am met in the reception of 50 Albemarle Street by Marsh Agency deputy m.d. Jemma McDonagh. The grand townhouse retains its Regency elegance and its stately drawing rooms still look like the sort of places gouty periwigged men might have, over brandies, discussed how best to put down a colonial uprising. “What about a spot of genocide, m’lud?” you can almost hear a foreign office mandarin suggesting to enthusiastic assents.

The address is also a landmark in British literary history: for 190 years it was the John Murray headquarters and in one of its drawing rooms, John Murray II infamously burned Lord Byron’s memoir after the poet’s death. Murray, incidentally, paid what (if The Bookseller had been going at the time) might have termed “a significant four-figure sum” for the memoir—an eye-watering 2,000 guineas (presumably world all-languages; not clear if audio or film/TV rights were mentioned). Ever the canny operator, Murray squeezed the rights-holder (Byron’s friend, the poet Thomas Moore) to get his money back with interest.

The British art magazine Elephant will cease publication at the end of this month after its publisher Colart International Holdings Limited pulled the title’s funding, citing the current economic crisis and a downturn in global sales of art supplies.

Colart purchased Elephant in May 2017 but will no longer fund the print and digital magazine. With no other funding available, the magazine is set to fold at the end of October unless a new owner is found.

"Colart is actively in conversation with several parties about taking over the magazine," says Karen Spinner, Colart's commercial director.

More than 300 authors including Neil Gaiman, Naomi Klein, and Lawrence Lessig have teamed up with advocacy group Fight for the Future with an open letter demanding publishers and trade organisations "cease efforts to undermine the essential contributions of libraries to an accessible and inclusive world of books”.

The letter mainly focuses on the lawsuit brought against the Internet Archive, over its Open Library programme, involving mass scanning and distribution of literary works under a process called Controlled Digital Lending (CDL) which publishers and trade organisations have criticised for “facilitating the distribution of millions of pirated books without paying a penny to the authors and publishers who produce them”.

There is also reference to the Association of American Publishers (AAP) suing to block a Maryland law that would have required publishers to offer commercially available e-book licences to libraries on “reasonable terms”.

The Authors Guild called the open letter "highly misleading” while the AAP and Publishers Association (PA) have sought to stress that the Internet Archive is “not a library” but instead “a pirate website”.

Consumers accused the defendants of signing agreements that let the publishers inflate e-book prices by locking in a 30% "agency" fee for Amazon on each sale, and guaranteeing that Amazon's prices would not be undercut.

A group of more than 300 authors including Neil Gaiman and Naomi Klein issued a letter Thursday criticizing lawsuits from major publishing companies over the lending of digital books.

The authors said in the open letter, organized by digital-rights advocacy group Fight for the Future, that publishers and their trade groups are "undermining the traditional rights of libraries to own and preserve books, intimidating libraries with lawsuits, and smearing librarians."

The letter said the authors were "disheartened by the recent attacks against libraries being made in our name."

What makes this writing course different to those currently out there can be summarised as follows: it is the only publisher and literary agent led writing course that is completely free and available to anyone.