"[A] friend who is a literary agent told me that he cannot even get editors to read first novels by young white male writers," Oates wrote, "no matter how good; they are just not interested. this is heartbreaking for writers who may, in fact, be brilliant, & critical of their own 'privilege.'"

Oates stated that this was "heartbreaking" for those writers who buy into the ideology of white privilege, and who may even be "critical" of it, but it is just as hard a pill to swallow for those white male writers who are not burdened by the inherent detriments associated with their race and sex.

After a flurry of last-minute filings and orders, the U.S. Department of Justice’s bid to block Penguin Random House’s acquisition of rival Big Five publisher Simon & Schuster is ready for court. Oral arguments are set to begin on August 1 before Judge Florence Pan at the E. Barrett Prettyman U.S. Courthouse in Washington, D.C., with the trial expected to run nearly three weeks.

The closely watched case holds major implications for a publishing industry that has been grappling with consolidation for years. It also looms as a key test for the government amid growing calls for more vigilant antitrust enforcement, and in the wake of a stinging defeat in 2018 in its bid to block the massive $85 billion merger between AT&T and Time Warner.

Boxerbaum joined Paradigm in January 2012 following a stint at APA Agency. He also previously worked at William Morris, Metropolitan and Endeavor after he started his career working for producer Jerry Bruckheimer.

Boxerbaum is known for his expertise in the spec script market. He brings with him a notable roster of directors, writers and producers.

Your chance to be a top author: Who hasn’t dreamt of having a novel published? Well, today the Mail gives you the chance to do exactly that. Send us part of your story and a synopsis, and you could win a book deal – with a £20,000 advance!

Have you ever dreamed of seeing your novel in a bookshop alongside those of your favourite authors?

Is there a hard-edged thriller inside you, just bursting to get out, or a brilliantly researched historical adventure, a tear-jerking romance or even a comedy of modern manners?

Many of us dream of having a bestseller — but first you have to get your novel published, a daunting prospect in today’s competitive book market. Until now.

Singh’s guide to getting hired at Big Tech firms landed among Amazon’s top 3,000 best-selling books, but his success also put him in the crosshairs of counterfeit book printers that have proliferated on the online marketplace.

Less than a year after the book’s release, Singh said he spends several days each month pushing requests through Amazon’s take-down system for illegitimate listings, and he estimates he’ll lose 20% of his revenue this year to accounts hawking bootleg copies of his book.

In big news for science fiction and fantasy publishing, DAW Books is no longer an independently owned publisher. This morning, Astra Publishing House announced its acquisition of the storied SFF imprint.

In a press release, DAW co-publishers (and, until today, owners) Betsy Wollheim and Sheila Gilbert said, “We are extremely pleased by Astra’s enthusiasm, and thrilled that we will be the sole SFF imprint of their company (a first for DAW). We think this is the perfect fit for us, and it’s exciting and refreshing to be an integral part of a new and growing company. It speaks volumes about Astra’s respect for our company that they have included our entire staff. We’re very happy.” 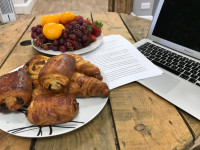 Stop f***ing about and start writing: Writers' HQ writing retreats are back!

This August, WHQ retreats will return to Brighton, Birmingham and Edinburgh, to be followed soon by Cambridge, Manchester and Glasgow.

Pre-2020, Writers' HQ ran 16 retreats every month across 14 locations across the UK, helping hundreds of writers turn out thousands of words.

At Stylist, we love a good story. Whether it’s a thought-provoking tale from Emma Cline’s 2020 collection Daddy or the exciting promise of Lisa Taddeo’s forthcoming Ghost Lover, we believe a tight, well-crafted short story can be just as compelling as a novel. And, more importantly, we know that our readers have stories to tell too.

If that’s you, then you’ve come to the right place. Stylist publishes a new short story (fiction) from a captivating writer each week – and we want your submissions. You don’t have to be established or have even written a story before to submit; we’re more interested in the quality of your words than your writing experience. Stylist Short Stories aren’t limited by genre, either – we’re after romance, horror, crime, fantasy, historical fiction and everything in between. All that we ask is that you’re an original talent whose voice resonates with fellow readers.

Stein to head new literary division of The Bright Agency

Bright has represented authors and author-illustrators for many years in children’s fiction and is now expanding to be a full-service creative agency, representing talent across writers, illustrators and animators.

The new arm, Bright Literary, is being led by m.d. Stein, whose list has included award-winning and bestselling picture book creators such as Benji Davies, Chris Chatterton, Yasmeen Ismail and Carys Bexington. She also represents Hannah Peck, who’s 2021 debut author-illustrated chapter book Kate on the Case (Piccadilly Press) was shortlisted for the V&A Illustration awards and the Alligator’s Mouth Award. 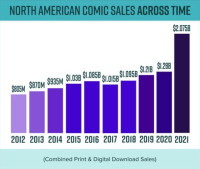 Sales of comics and graphic novels rose 62% in 2021 over 2020, according to a new joint estimate by ICv2's Milton Griepp and Comichron's John Jackson Miller. Total comics and graphic novel sales to consumers in 2021 in the U.S. and Canada were approximately $2.07 billion, the report found, a sales level that is 70% higher than sales in 2019, the last pre-pandemic year.