Scotland has so many book festivals readers are spoiled for choice. But for crime fiction fans, this weekend is particularly special, as Bloody Scotland arrives in Stirling for the eighth time to bring authors and book lovers together at around 40 events over three days.

On Friday night, the winner of the 2019 McIlvanney Prize for Crime Novel of the Year will be announced (see panel, right, for The Scotsman’s reviews of the shortlisted titles). There is also a new prize for debut authors. Bob McDevitt, director of Bloody Scotland, said: “The festival is always looking for new ways to discover and promote new writers… Publishing is a tough old world these days and anything that gives a bit of profile to a new writer is a good thing.”

The newly revedeveloped three-floor property will open its doors to founding members on 1st October, before its official launch on 24th October in artistic collaboration with the cultural anthology Postscript to create a unique photoshoot and literary panel.

“Located in the heart of Shoreditch and Old Street at 2 Charlotte Road, the three-storey building offers a different atmosphere on each floor,” according to academic-turned-entrepreneur Fulton.

Fulton, who studied and taught at Columbia University in New York for her PhD and Post-Doc, said: “I finished teaching there in 2016 and tutoring and teaching all over New York, in libraries as well, I wanted to keep teaching literature. I am looking for something but found writing by myself quite isolating. I would write ‘out’ in the Southbank Centre or a library but it’s frustrating because you don’t meet other writers in this way. I love London but there was nothing like this in London. I had this idea of opening a co-working space for writers and wanted it to be more than co-working so I developed this idea of it having more than one storey.”

The Writers Guild of America will stay the course on its ongoing fight against top Hollywood agencies and packaging fees, as its membership has reelected President David A. Goodman to another term after a heavily contested campaign against challenger Phyllis Nagy.

It was a landslide victory for Goodman, receiving 77% of 5,677 votes counted with 4,395 votes to Nagy’s 1,292. He will continue to serve alongside Executive Director David Young, Vice President Marjorie David, and new Secretary-Treasurer Michele Mulroney, who has previously served as a board and negotiating committee member.

One of Wales' largest publishing houses is to "wind down" publishing new works to focus on printing, its bosses say.

Gomer Press, set up in 1892 and based in Ceredigion, has about 3,500 titles in print in English and Welsh.

It said the decision followed a strategic review, "thus ensuring the future" of its 55 employees, but authors called it a "sad" move.

Gomer said it would continue working with authors and the Books Council of Wales to publish scheduled titles.

Cindy Uh has joined CAA as an Agent in the Books department.

Uh moves to CAA following a four-and-a-half-year stint at Thompson Literary Agency, where she represented a range of nonfiction authors in the categories of memoir, politics, food, business, health and wellness, and lifestyle.

She has also consistently been ranked one of the top agents for illustrated/art projects.

Publisher E-Book Revenue Decreased In First Half Of 2019

A familiar story is told by recent statistics released by the Association of American Publishers: e-book revenues continue to decrease for many in the industry.

According to AAP's publisher revenue report, based on 1,360 participating publishers' figures, e-book revenues decreased in the first six months of calendar 2019 by 3.8% over the same period in 2018. E-books were one of only two format categories that saw revenue decreases in this period (the other category being physical audio).

UK literary agents are navigating an unprecedented boom in UK production, with demand for their writing and directing clients at fever pitch.

“My clients are so busy at the moment,” said one literary agent at a major London agency. “Everyone is scrambling around to hire [the best talent], it’s very difficult for producers to get to them.”

The majority of the growth is in the high-end TV sector, the production of which tends to tie up clients for much longer than film. (The inward investment feature boom is doing a good job on its own of employing UK actors and crew). Netflix alone said it has has shot some 40 productions in the UK this year, while the major broadcasters are responding to the competition from the US streamers by making increasingly larger-scope series. 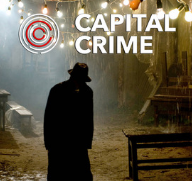 Capital Crime festival will host the inaugural New Voices Awards to champion the next generation of talent in the crime and thriller community next month.

In association with D H H Literary Agency, the awards will give entrants the chance to have three opening chapters of their debut novel read by agents, publishers and readers, who will then vote for their favourites.

Capital Crime co-founder and D H H founder David Headley, said: "At D H H we’re always on the lookout for talented new authors. The New Voices Award is an exciting competition that gives readers the power to help identify new talent. It promises to be a brilliant platform for aspiring writers."