Q magazine will close after one final issue, it has been confirmed. Publisher Bauer Media had hoped to find a buyer, but seemingly no deal could be done to rescue the music magazine.

It was one of ten titles put up for review by Bauer in May. Last month it was announced that three of those ten would close, including another younger music title, the magazine spin-off of radio station Planet Rock. But Q was among five magazines that the publisher hoped might be bought by another company, with talks about a possible sale seemingly at an “advanced” stage.

Prior to that announcement the team who produce Q were pretty certain closure was incoming and put together the most recent issue as if it was the last. The prospect of surviving under new ownership allowed them to start working on another edition, but yesterday Editor Ted Kessler confirmed closure was now confirmed, making the upcoming issue the grand finale.

Richard Madeley and Judy Finnigan have relaunched their competition for unpublished writers.

The winner of the competition, which has been run in previous years, will see their manuscript published.

Madeley said: “Across a wide range of genres, including crime, historical, romance or contemporary, we want to hear your stories and give one talented writer the joy of seeing their novel in print.

“We know how testing the last few months have been for everyone, so if you’ve been motivated to write – or just want to dust off that manuscript in your bottom drawer – send us your submissions.”

A new survey of writers has yielded powerful evidence that writers have been more resilient to the impact of lockdown.

Whether or not we see the next big literary success story, we are on track to see a flurry of new books, unlike new film and TV content where productions have stalled.

With book downloads and Kindle sales currently going through the roof, more content and talent discovery is fantastic for avid readers. And many more people have taken up reading since pandemic restrictions locked them into their homes.

Independent publishers Dead Ink and Influx are launching an imprint, called New Ruins, focused on books that "defy the conventions" of literary and genre fiction.

The imprint will make commissions and invite submissions from literary agents, with its books available to the trade alongside Dead Ink titles, represented by Impress Books.

Nathan Connolly, publishing director at Dead Ink, said: “New Ruins will bring an exciting and dynamic range of new fiction to readers, so it is important that it is produced in an exciting and dynamic way. Collaborating with Influx Press to break a few boundaries and bring something new to the industry is exactly the way it should be done.”

A3 Artists Agency has brought in four former Paradigm agents to reestablish a literary division. Veterans Andy Patman and Adam Kanter have come on board as A3 partners and Co-Head of Television Content and Motion Pictures, respectively. They are being joined by fellow former Paradigm agents Katt Riley and Martin To on the lit team, with plans to hire more agents, coordinators and assistants while many talent agencies have been contracting in the face of the coronavirus-related Hollywood production shutdown.

That includes Paradigm, which in late March instituted temporary layoffs for 250 employees. The list included Kanter, Riley and To, sources said, while Patman left Paradigm last week, I hear.

I run a solo agency practice, Lotus Lane Literary, which I established in 2013. I work from my home-office in New Jersey and employ a part-time intern throughout the year. I do business mostly in the US, the UK, India, and sometimes in other Asian and European countries via book scouts. My roster ranges from debut to well-established writers from all over the world. Lately, I have also started selling film/TV options to production houses in India, UK and the US.

In all these years, my life has been enriched in ways I could not have imagined. The camaraderie with authors and editors is special. It is gratifying to wake up each morning and look forward to reading a new manuscript, or working with an author on an edit, or brainstorming characters and their motivations. My authors often joke that they have graveyards full of characters I have suggested eliminating from their manuscripts. I love being immersed in narrative in any form, as books not only open us up to discovery, wonder and excitement, but also help us make sense of our volatile world.

While the joys of being a literary agent are deeply enmeshed with creativity, it is ultimately a business. In an industry that works at the dichotomous intersection of art and commerce, running a profitable business is always a challenge, especially in times of global pandemics and recessions. 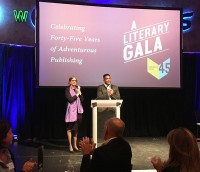 Though many independent publishers interviewed by PW last week reported a drop in sales during the Covid-19 pandemic, several said sales are—surprisingly—up for the year, buoyed by strong interest in backlist titles, direct sales to consumers, and enhanced digital initiatives. Most also said their staffs are working remotely and will continue to do so until at least the end of August. Some are allowing limited staff to go to their offices irregularly to fulfill orders and do necessary administrative tasks.

The BBC is showcasing new comedy writing across its network of local radio stations this weekend.

Sketches, stand-up, comedy songs and more will be included in a series of Upload Festival programmes running on 39 stations across the UK.

And as part of the event, the BBC is running free online workshops on writing both sketches and comedy in general.

Independent Publishing in a Post-Covid World

The Covid-19 pandemic has already had a big impact on independent publishing. Some changes—working at home, employee furloughs, curbside shopping—were thrust upon the industry suddenly. And though they weren’t part of a concerted effort to change old and inefficient business practices, they may indeed have that effect. Here are several new realities that are likely to survive the disease itself and lead to evolutionary leaps in book publishing.

First Story, the charity behind National Writing Day, has launched a 24-word story challenge to mark the annual nationwide celebration of the pleasure and power of writing and words. This year it will take place on 24th June. Together with its National Writing Day partners, a coalition of leading literacy organisations and publishers and a host of the nation’s much loved children’s authors including Children’s Laureate Cressida Cowell, Malorie Blackman and Frank Cottrell Boyce, First Story is challenging everyone – especially young people – to come together to share their experiences.

With a nation in lockdown, and the extreme experiences of the past few months keenly felt, the power of words to give voice to our stories is timely. Many pupils and students are still home-learning; and schools are closed to most of their cohorts.

National Writing Day is leading the charge with a simple writing call to action: a challenge to everyone to write just 24 words, in 7 minutes, starting with the prompt ‘One day…’ and to share their work on social media using the hashtag #247challenge. The challenge involves everyone, and participants can enjoy writing together and take a moment to express themselves.