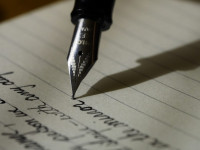 Jena Elizabeth McLean, an artist-in-residence at TNB, is the one in charge of the weekly writing prompts which included phrases such as “today is the best day” and “into the impossible.”

“[It’s important to give] a writer time to explore an idea in an unstructured, low-stakes way that keeps their writing muscle active,” she said.

McLean said the idea originated from workshops TNB puts on for young creatives.