How soap operas influence my saga novels by Glenda Young

I’ve been a fan of Coronation Street since before I can remember. It was the show I used to watch with my mum and grandma, all three of us huddled on the sofa. My grandma and I used to love Elsie Tanner, the wicked woman of Weatherfield, no better than she ought to be. She had a string of men in her past and I loved the naughtiness of Elsie, the cheek of her.

I went on to write TV Tie-In books about Coronation Street for ITV. I also contributed to the official ITV Corrie website, to their official magazine and to various one-off ITV publications about the soap. I have also written unofficial fan books. In addition, I set up and now edit the Coronation Street Blog, a fan site written by and for fans. It’s been online since 2007 and remains unique, a labour of love. And I’ve been writing online Corrie weekly updates since 1995. So being a fan of the show and writing about it is in my blood. It comes naturally to me. You could say I’m steeped in soap opera. I know their twists and turns, their cliff-hangers and signposts. Most of all, I know their women.

'I have to put my phone in the wardrobe': how do authors deal with social media?

Zadie Smith “can’t stand the phones”. Nick Laird pointedly owns a phone that’s not smart. Brett Easton Ellis despises Instagram as “that fake place” while Jonathan Coe has said he finds being on Twitter “a bit like writing in a virtual cafe”. Mark Haddon announced a retreat from Twitter when The Porpoise was published because of “a growing sense that it was detrimentally affecting the way I both looked at and thought about the world around me”, but has posted every week since. Ayòbámi Adébáyò, author of Stay With Me, keeps two mobile phones, and when she writes, she hides the one with all the apps in the wardrobe. Authors can have an uneasy time with social media; “always twitching the sleeve with its wants and needs”, as Robert Macfarlane puts it (at which point, he says, he shuts it down for a few hours). So how do writers manage – or deploy – the distractions?

“Every secret of a writer’s soul, every experience of his life, every quality of his mind, is written large in his work” ~ Virginia Woolf

Becoming an author can change your life—not to mention the impact the author’s voice has on the readers. However, writing a novel is not a piece of cake. It is better to call it quits then completing a book. It happens when you run out of ideas, or your own story bores you, or you become overwhelmed by the scope of finishing what you started, compels you to quit.

For a beginner, writing can seem daunting, but if you have a passion to write your own story and know the ways to make the process easier, you can make it to the end of your novel. So without further ado, let’s discuss ten tips which can keep you motivated till the end of your project.

Writing a novel has traditionally been understood as a solitary and often grueling affair. Novels are frequently taken as the detailed expression of a single worldview or sensbility, even if this is distributed across multiple characters and plot points. In the New Yorker, fiction writer Ceridwen Dovey profiles three writing collectives that explode the traditonal view of the novel as an individualistic enterprise. These collectives (one working in romance fiction, another in erotic fiction, and the other in historical fiction) have each published multiple successful novels composed through elaborate collaborative writing methods. Together they demonstrate that writing doesn’t have to be the exclusive province of the solitary tortured “genius.” Check out an excerpt from the piece below.

What it really takes to be a writer, according to Roald Dahl

Ever dreamed of becoming a great writer? We’re pretty willing to bet that almost anyone reading this page has, at some point, felt a story bubbling up inside of them… but that, for whatever reason, they decided not to sit down and put pen to paper.

Of course, it’s not exactly unusual that so many of us have been scared off. After all, writing is hard work. Indeed, looking back on his years as a writer in Boy: Tales of Childhood, Roald Dahl contended that “two hours of writing fiction leaves this particular writer absolutely drained”.

The celebrated author continued: “For those two hours he has been miles away, he has been somewhere else, in a different place with totally different people, and the effort of swimming back into normal surroundings is very great. It is almost a shock.

When you imagine the life of a writer, you probably see us shut away in a room at a desk, scribbling or typing furiously, or staring into space hoping for inspiration. But if you write for children, you are likely to spend a good bit of your working life meeting your readers. At certain times of the year - especially now, with new books hitting the shelves for autumn and Children’s Book Festival on the horizon – writers can have a full timetable of events that leave them barely enough time to actually write.

I have two new books for children coming out this autumn – Laura’s Spooky Show has just hit the shelves, and Reindeer Down, a Christmas story for younger readers, will be published by the O’Brien Press in October. It’s exciting to be embarking on a new round of visits to schools, libraries and bookshops. Exciting, and terrifying.

Who is Kanishka Gupta? A book magician of sorts

Ever spare a thought for how millions of Indian readers get their hands on a variety of amazing books? A great idea or story still needs to be considered by a publisher to make it to the shelves. A lot happens behind the scenes before a book sees the light of the day, and that's where the role of a competent agent becomes critical.

An aspiring author and a college dropout, Kanishka Gupta met with several disappointments with regards to finding the right publisher for his own manuscript. The agency he opted to go along with turned out to be phony, which left him further exasperated. When he didn't receive much guidance for his manuscript himself, he founded an assessment agency, Writer's Side, to systemise publishing. A one-of-its kind agency, Writer's Side brought immense success to Kanishka, the benefits of which he hopes to extend to authors worldwide. As Writer's Side completes 10 years, he has secured over 500 book deals for his authors. As of 2019, he represents over 400 authors from across the world. 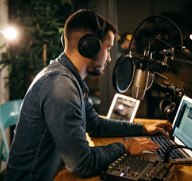