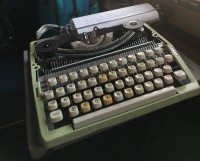 3 books to help you become a better writer in 2020

The New Year will soon be upon us and as this is seen as a time of rebirth and rejuvenation, many people use the New Year to embark on a journey of self-improvement and self-reflection. Many people take this time to pick up a new hobby, create and maintain better habits, and maybe improve one’s lot in life.

One skill that I personally try to improve upon is writing. Writing is a necessary skill and a refresher course on writing is apt to keep those skills sharp. It’s also helpful so that in the middle of an important writing session, you don’t have to stop and look up whether it’s light bulb or light-bulb (lightbulb), or where to put the apostrophe in the plural of Adams ( … this one maybe look up).

In writing, you can break the rules — but only if it works

'Tis the season … so here's some unashamed regifting: a year-end roundup, featuring an all-star team whose members have appeared in these columns.

First, my Uncle Ollie, who sent me his copy of the New Yorker every week after he read it. If you let the quality of that magazine's writing and editing wash over you and if you follow its example, your writing will grow stronger.

Second, my mother, who taught me to read when I was 4, sounding out letters and words on a ketchup label. You can give your kids and grandkids the same gift.

Third, my sixth-grade English teacher, Miss Moore, who taught us to diagram a sentence, giving us a keen sense of the structure of language. Back to her later.

Fourth, my college English professor, John Finch, who taught us to create an outline before starting to write. The benefit: All your thinking goes into the outline; when you start to write, just follow the outline.

Fifth, the playwright August Wilson, who gave us this advice: "The simpler you say it, the more eloquent it is."

The naked truth: how to write a memoir

Some memoirists send drafts of their work to loved ones, or even not-so-loved ones, and where there’s a response alter their writing as a result. Others see no need for consultation. Either way, when writing about your own life, it’s important to get the monkeys off your shoulder – to be uninhibited by the possible fallout of your words. You can worry about other people later, when you’re editing. In mid-flow, you need the illusion of privacy, not to be anticipating people’s reactions (which are in any case unpredictable). Most self-censorship is cowardly. In Elizabeth’s Strout’s My Name Is Lucy Barton, the writing tutor Sarah says: “If you find yourself protecting anyone as you write … remember this: you’re not doing it right.”

Everyone has a book in them, it’s said, but as Martin Amis noted in his memoir Experience (2000), what everyone seems to have in them “is not a novel but a memoir … We are all writing it or at any rate talking it: the memoir, the apologia, the CV, the cri de coeur.” Democracy itself may be under threat but the democratisation of the memoir keeps advancing. What was once a geriatric, self-satisfied genre – politicians, generals and film stars looking back fondly on long careers – is now open to anyone with a story to tell. And the genre has reinvented itself to take diverse forms: lyric essay, creative non-fiction, confessional prose-poem and so on. You don’t have to be famous to write a memoir. And it doesn’t have to be cradle-to-grave: a slice of life, or collage of fragments, can be enough.

Walking into the offices of the Book Group, housed in a small (by Manhattan standards) building on West 20th Street, one is greeted by the standard design trappings of literary agencies. Posters of book jackets line the walls and dozens upon dozens of books sit on shelves hanging above desks in cubicles and offices.

In the conference room, where the books of clients sit spine out on shelves that stretch from hip level to the ceiling, the vibe is unusually positive. Those who work in publishing can tend toward glass-half-empty. The eight women who work at Book Group (four principals, one senior agent, one agent, and two assistants) seem different. It feels a bit like stepping onto the set of a TV show about book publishing—one cast by the creators of Friends, featuring characters written by Aaron Sorkin.

Upon arriving at Waterstones there is one section we tend to flock to: fiction. We crave the idea of losing ourselves in others’ stories, travelling into our imagination. Whilst I’m an aficionado for the fictional, in recent months I’ve come across a new genre that allows us to explore the amazing and varied world we live in and follow the stories of real people’s adventures and experiences, of people’s subjective and varying experiences when travelling across the globe.

I’m now a strong advocate for the modern travel genre, and have a few recommendations for reading over the winter break.

Travel writing encompasses so many styles and sub-genres – the common characteristic is simply to give a new perspective on life, through stories of new places and cultures. It isn’t simply recommendations of where to go and what to see, like promotional travel magazines, but rather tales of real people going out and seeing the world.

Point of View Quickly Brings a Story to Life

Intimacy with characters will hook your readers

A close point of view, whether first person or third, will supply the inner meaning to a story. Such an intimate point of view brings to any piece of fiction insight, warmth, understandable human foibles, and an empathetic reader attraction to the character. This “limited” point of view facilitates a direct transmission of emotion. Without such a specific character perspective, all the readers have to enlighten them is outer description—although externals can, of course, go a long way to pointing to feeling and shoring up emotional declarations.